During World War II Fritz Grünberg (1911) was an important member of the Contact Committee. Because of this work his wife Inge Köbner (1917) and Fritz were exempted from deportation. After the war a storm of criticism broke loose. This portrait has been realized with the help of his son Dano Gruen and former history teacher Hans Piek.

In his youth it was difficult for Dano Gruen, born after the war, to fathom his father. The German born Fred E. Gruen, as he called himself after his emigration to the USA, was a straight forward man. ‘My father did not know a middle course, he did not compromise. He possessed a “pull yourself up by the bootstraps attitude” as they say in America. I did not understand that for a long time. At the moment I went deeper into his past I gained some understanding. In particular the time he spent in camp Westerbork and the work he was doing must have shaped him.’

In contrast to many of his Jewish fellow countrymen Dano Gruen’s father went to the Netherlands in the early thirties, to find a job. In the pre war years Fritz Grünberg managed to work his way up to become a reasonably successful businessman. Fritz was married to the six years younger Ingeborg Köbner, like him from Jewish origin, born in the nowadays Polish Breslau.

After the German invasion Fritz Grünberg’s business came to a hold, because of the anti Jewish decrees. Fritz introduced himself to the Jewish Council, got hired, and got a special assignment. As one of the leaders of the new to be established department of the Jewish Council in camp Westerbork he would be sent to Drenthe for the in origin Jewish Bank Lippmann and Rosenthal that was confiscated by the Nazis, in order to register the properties of newly arrived prisoners. Fritz agreed and left for Westerbork on the 30th of July, 1942 together with dozens of other employees of the Jewish Council (mainly young women).

For about one year Fritz Grünberg as Leader of the Jewish Council witnessed tens of thousands of people enter the Registration building of camp Westerbork. Friends, acquaintances and people he knew; every Jew was arrested and brought to Westerbork. Most of them only stayed for a couple of days or weeks. Followed by the deportation to the East. From his room in barrack 44 Fritz could watch the trains leave the camp.

On the 29th of September 1943 Fritz was joined by his wife Inge. The Jewish Council in Westerbork had already been dissolved: almost every Jew, so the Nazis thought, already stayed in Westerbork or was deported to the East. Registration by the Jewish Council was no longer needed. Besides, Grünberg and his colleagues had a conflict with the German-Jewish management of the camp. The conflict was decided in favor of the first inmates by the camp commandant.

After dissolving the Jewish Council in camp Westerbork, most of the old-employees were designated to other activities or deportation followed. Together with three other leaders of the Jewish Council, Fritz Grünberg was put in charge of a new organization, the ‘department of contact’, also known as the Contact Committee, acting as a link between the camp and the Jewish Council in Amsterdam. Later on other activities followed. In 1944 people could buy a provisional exempt of transport provided by this committee, for instance by payment in diamonds. Camp commandant Gemmeker had issued a special assignment to the committee. In order to make sure their work went according to plan, two of the leaders of the Contact Committee usually stayed in Amsterdam, whilst the other two were in Westerbork. In the capital they used to work from the office of the Expositur in the Jan van Eyk Street. Fritz and his co-workers were sleeping in the building next door: their own home had been emptied long time ago.

My father never told much of his war past. He did however tell us he had had the intention to help the people in Westerbork. That must have been very difficult for him. When you look back at the time and place where he lived, for Jews like my father there were few good choices to make.

At the end of 1944 Fritz and the other leaders went to Amsterdam together, against all regulations and went into hiding. Whilst in hiding they wrote a pamphlet and they deposited it at a solicitor, for the purpose of writing down the history but also as accountability for their actions. In their own words, the Contact Committee had held back people who were to be deported to the East, sabotaged trains, illegally admitted names to the ‘Sperrlijsten’ (lists with people’s names who were kept back from deportation for the time being), smuggled mail, photos and films out of the camp and falsified evidence of christening.

After the war the Contact Committee was center of a lot of commotion. Some old inmates and historians (amongst whom Jacques Presser) thought Fritz Grünberg and other leaders of the Committee had enriched themselves by stealing from their fellow prisoners. Presser made fun of the Committee by calling it ‘the Cognac Committee’. When the case came to court Fritz and his colleagues were cleared of any blame. At the risk of their own lives, they had undertaken a lot of illegal activities, as was put forward. 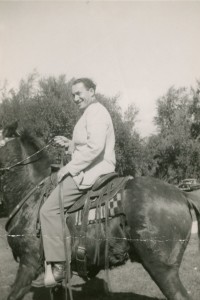 Although he was acquitted, for Fritz Grünberg the damage had already been done. As a leader of the Contact Committee he was treated as an outcast in the Amsterdam Jewish community, where he lived at the time. At the end of the 1940’s Fritz –divorced in the meantime – decided to emigrate to the USA.

Dano Gruen: ‘My father ended up in San Francisco. In the fifties he helped to initiate all kinds of religious places of pray, all in the same street. The idea was that every faith had to be and was allowed to be represented there. He met my mother in the USA as well. When I was six years old, my parents got separated. My father however, has always stayed involved with the family and in my teens I went to live with him again.

My father never told much of his war past. He did however tell us he had had the intention to help the people in Westerbork. That must have been very difficult for him. When you look back at the time and place where he lived, for Jews like my father there were few good choices to make. In his position he had the choice between bad and worse. He had no one to rely on. It must have lead to the mentality that astonished me so much in my youth and also has frustrated me a lot.’

Fritz Grünberg died in the early eighties in the USA.