Jacob Boas’ story is that of a young concentration camp survivor who emigrates to the United States. Although growing up after the liberation and with almost no knowledge of his time in camp Westerbork, the war is never far away for historian Boas (1943). 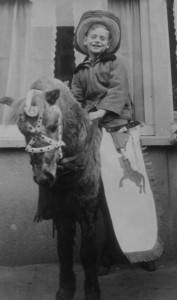 Going through my Westerbork file, I came across my birth certificate and a Red Cross card testifying to my liberation. The former showed that I came into the world at 5:35 on November 1, 1943 – inmate 9378 – the only new birth that day. The Red Cross card indicated that at the time of liberation, April 12, 1945, I was 17 months and 12 days old. We actually did not leave the camp until June 6 – this, too, according to the Red Cross card.

I would be lying if I claimed to have any memories of the camp. It took years before I became aware of our family’s mournful history. My parents Barend (1918) en Anne Boas (1918) and my brother Marcus (1941) were arrested on March 19, 1943, dispatched to Vught, and from there, less than a week later, to Westerbork, where we managed to hang on until our liberation by Canadian troops. We were lucky. My father was a tailor who “volunteered” to work outside the camp at German headquarters in The Hague. My mother, pregnant with me, and my older brother stayed behind. There was more to our survival, far more than I can go into here, but tailoring definitely played a part, a large part.

After the war we returned to Amsterdam and my parents picked up the pieces. I grew up in the prewar Jewish neighborhood in the heart of the city. Down the street was a thoroughly gutted synagogue where I played amid the ruins. I can’t say I had an unhappy childhood. I was a good student, though a very skinny and high-strung one. In first grade I was sent to ‘de kolonie’ in Zandvoort to fatten up and get a grip on my nerves. The ordeal lasted six weeks. All efforts to fill me out came to naught and I was as nervous as before I left – possibly more so.

1957 found us living in Montreal, Canada. There had been threats to peace (1956) and my parents decided to get away once and for all. There was no extended family to keep us in Holland; with few, very few, exceptions, they had all been murdered. The only object to survive the war and postwar memoricide was my parents’ wedding portrait with the two murdered nieces acting as bridesmaids. Canada would be a new chapter. To start with a clean slate and never to look back – that was the prescription for the new life in “the true north strong and free.” But there is no new life without the old one. We were, and always would be, “displaced persons.”

I do not believe ‘people are basically good at heart.’ The shoah has taught me that homo sapiens are easily manipulated and misled.

I went to high school and college in Montreal. Ten years later I enrolled in a Ph.D. program in California, studying European history. It was there that I seriously began look into our past. I wrote my dissertation on German Jews under Hitler (1933-1939). Several years later I wrote a history of Westerbork – a history that was, and was not, about me. A book and a play about teenagers like Anne Frank who kept diaries in the shoah came next.

I would again be lying if I were to say that after years of study I am any better informed than before I started out – superficially, perhaps, nothing more.

Our attempted destruction has left me with a jaundiced view of humanity. I do not believe ‘people are basically good at heart.’ The shoah has taught me that homo sapiens are easily manipulated and misled. The will to destroy one’s fellows is not unique to one particular nation or people. It slumbers in the vast majority of humankind. Of course, there are exceptions – there always are – but the exceptions are few and their voices easily stifled. “Never again” has proved to be a hollow phrase. Genocides are being perpetrated, or planned, as I write. How many children are being born today in circumstances not unlike my own? How many are being killed or left to starve while the world looks on? Racism is on the rise; rightwing and fascist parties are spewing their venom everywhere you look, including Holland. It seems as though people can’t live without an “other” to despise or hate. Discrimination against Roma and Sinti is ongoing. Muslims and Arabs are feeling the brunt today. Tomorrow it will be others. Hatred of Jews is on the increase once again. Ironically, Jews are in the same position as Muslims: the collectivity is held responsible for the actions of a relative few; all Muslims for terrorism, all Jews for crimes committed against the Palestinians. It just never ends.